Today, we are talking about the Roman goddess Cardea, who was responsible for the door – and everything connected with it (threshold, handle, hinges, handles).
Her male counterpart was called Forculus and if you write about door deities, of course, the two-faced Janus may not be missing, who is probably the best known one of all.
Perhaps this article opens a door for some readers who have so far never had any contact with mythology. I would appreciate that! 🙂 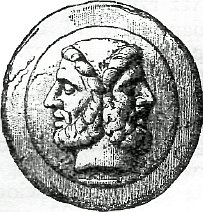 Janus had a temple on the Forum Romanum, which is said to have been built in the time of the second legendary Roman king Numa Pompilius. This king was the successor of Romulus and married to a Sabine. He introduced another important cult (probably of Sabine origin) besides Janus, that of the Vesta.

A brief review of Roman history:
Romulus and Remus, the sons of the war god Mars and the Vestal Rhea Silvia, were found and suckled by a wolf after the death of their mother (she was not allowed to have children as a Vestal).

According to legend, Rhea Silvia was supposed to be drowned in the Tiber, and a servant was said to throw the children into the Tiber. There are different variations of what happened to Rhea Silvia. Either she dies, or the river god Tiberius mercies her – as it happened to Romulus and Remus.

Here you can see very nicely how the twins are found by Faustulus and brought to Acca. Faustulus, a shepherd, and Acca, become the parents of Romulus and Remus.

Romulus kills his twin brother Remus and turns into the first king of Rome. The parallel to the biblical fratricide of Cain and Abel is worth mentioning.

As king of Rome, Romulus had a big problem at the beginning: there are a lot of men in Rome, but no women. Romulus decides to get women for the Romans and lures his neighbours into a trap: the Sabinians and especially their daughters.

What initially appears to be a classic women’s robbery may seem a little less drastic, considering that Romulus first asked the Sabine fathers for their daughters’ hands. Perhaps some of them might have fallen for one of the stately Romans?
This is of course very speculative, but it is certain (mythologically “certain”, to be specific) that the female Sabins, as mothers of Roman-Sabinese children, ensured that their husbands and fathers did not continue to war with each other. 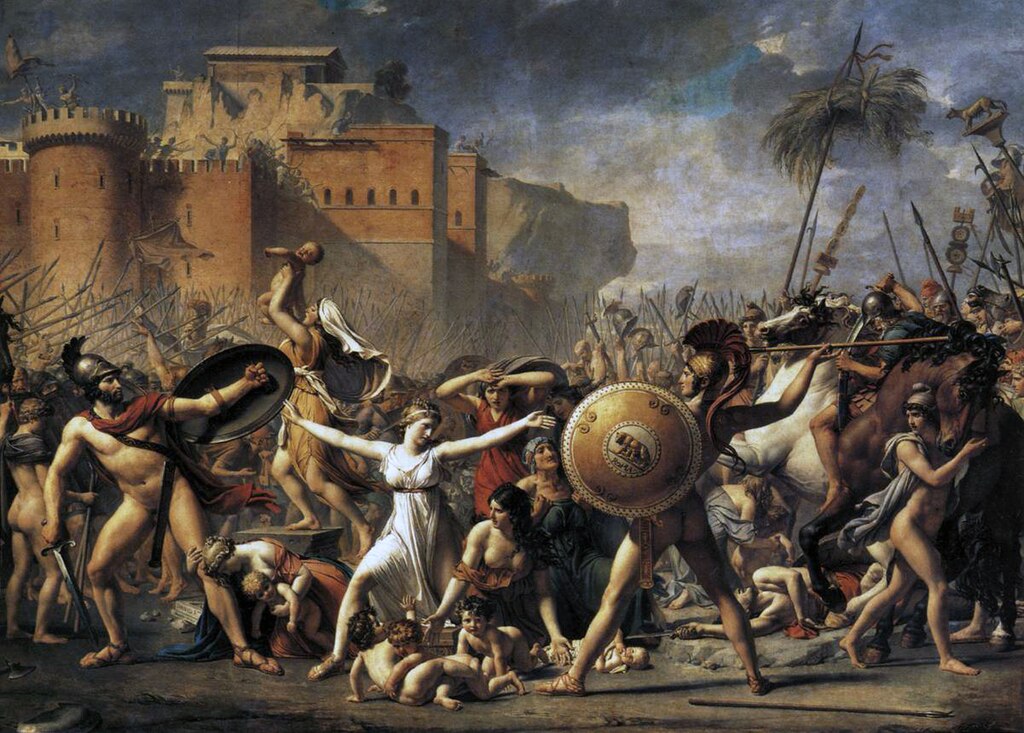 According to legend, King Numa Pompilius, the successor of Romulus, lived with the Sabinians for a while and brought the Sabine Vesta cult to Rome.

There are different approaches to the historical development of Janus (as far as this can be traced back historically at all). Mythologically, his cult is also attributed to the second king of Rome.
Some religious scholars assume that he is a deity of “beginning” and “end”, a kind of “main deity” on which everything else depends in principle. Freely based on Hermann Hesse:”Every beginning has a magic and every end has a new beginning.”

Vesta would then be the “third side of the coin”, a goddess of fire (eternal fire). The initial-and-end God Janus and Vesta can also be found in other cultures, especially in India as Vaju and Saraswati.

By Suraj Belbase – Own work, CC BY-SA 4.0, Link Vayu, a kind of “wind god” who is also connected with the breath (Prana).

Relatively complicated and somewhat older, but nevertheless worthwhile are the thoughts of the religious scholars Eliade, Schmitz and Dumézil, who have kindly been included in the Wikipedia article about Janus.

The reference of Janus to a sun god is also remarkable at this point, because he then might be connected with the two solstices in the year and was already known to the Sumerians. Isidor of Seville describes the solstices as “two doors of heaven” (ianuae coeli) from which the sun comes out and enters in again (Etymologiae 13.1.7). Ianua (lat. door) and Ianus/Janus are closely connected etymologically.
From knowledge of the solstices also the mythological figure of the “divine twins” is said to have emerged, which appear in many cultures and in my opinion also reverberate in the double-faced Janus. Or in the history of Romulus and Remus.
Perhaps even in the history of Cain and Abel?
For one of the brethren is mortal, and one is immortal.
Here too one can obtain comprehensive information, though the reference to Australian mythology is missing in both parts (still).

However, E. Smart comes to a conclusion regarding this, which I also would have formulated now. 😉

The temple of Janus had a special function in ancient Rome for centuries.

Whenever Rome was at war, its doors remained open. In peacetime the doors were closed again. It is possible, however, that this practice was an invention of Emperor Augustus, who at the time of his reign boasted of having closed the temple of Janus three times.

If you look at the mythological tales about the god Janus, you will also find a connection to the goddess Cardea, which is handed down by the Roman poet Ovid. 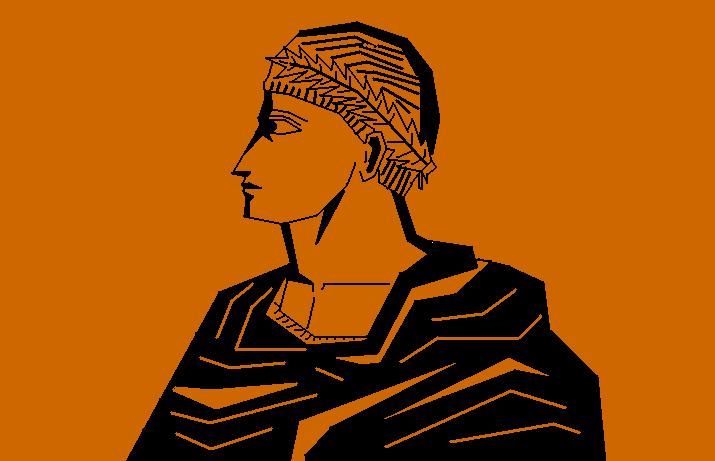 Ovid was a poet – or rather a writer who wrote in verse, as it was customary at the time – who lived in the age of Emperor Augustus. Many of his stories can be found in modern literature (in a modified form). He made it his business to write about love and the art of loving (Amores, Ars Amatoria) But he also collected different mythical stories (Metamorphosen, Fasti) and was finally bannded from his favorite city Rome

The story of Janus and Cardea comes from the part of his work dealing with mythical stories, the Fasti.

Ovid was, one could interpret this from his lyrics or look at the quite obvious picure above, a very passionate person, whereby the question always remains, of course, whether he really described himself or let a fictitious, lyrical ego tell. For example: his banishment may never have taken place, but rather was an invention of himself.

This “literary fiction” of his exile becomes especially exciting because, according to the legend, the city of Tomis (Tomoi) was the burial place of Absyrtos, the brother of Medea, murdered by her.

So Ovid wrote the following story about Janus and Cardea in the Fasti:
First of all, he notes that the 1st day of the month is dedicated to the goddess Carna, assuming that it is the goddess Cardea. (Probably because the 1st of the month also has a “threshold function”.)
He then calls her “Cranaë” and tells the story of this nymph, who happily hunted in the forests of Arcadia and was occasionally confused with the moon goddess Diana. Whenever a man approached her, she pretended to go with him. “Just find a hidden cave, I’ll be right behind you.”
In this way Cranaë got rid of all the annoying worshippers, for of course she quickly hides in the thicket.
But when the double-headed God Janus asked her, this trick didn’t work, because he could see what was happening behind his back. He overwhelms Cranae in the thicket, which Ovid describes very clearly: “You can’t do anything”,”Do nothing”, he lets Janus repeat twice.
After the deed Janus declares Cardea/Carna/Cranaë to be the goddess over the doorsteps.

The story of “robbery and subsequent idolisation” appears more frequently in myths. For example, with Bona Dea or with Priapus. .

In the goddess Cardea there are probably different deities fused together. Thus, this goddess, if one considers the ovidic reference of her as “Carna”, also finds a reference to the healing deities,
Carna was a goddess for the heart and the human life force, who also had the ability to deter so-called Striges, strange vampire creatures who are said to steal small children. A reproach that was also reported of Lilith.

Cardea, in her function as a door goddess, was able to keep away such Striges. All you need to do is hang a little hawthorn on the door.